Legals Only weddings: clarity for couples

Nat asks an excellent question that I’ve come across a few times:

How do you lock down clear processes for legals? I often have the issue of legals being pushed to a short and sweet without them paying for that. I respond to all legals only enquiries with clear dot points – where they occur, when and how long, what it entails etc. it almost ALWAYS though ends up with the couple angling for it occurring in a park/ air bnb etc. That’s fine- I add to my quote if that suits me however then it’s ‘oh only 5 minutes?’ Even after they’ve agreed to the terms of the service. I’m happy for them to add their personal vows etc but I don’t know how much clearer I can be about the bare bones wording. This happens to me all the time and I feel like I’m ripping them off when I get this response (when I’m not). Any advice on wording/ making it clearer? I hate the thinly veiled shock that they’re not having a ‘ceremony’ on the day.

All I can do here is tell you all what works for me, and hope that it might work for you 🙂

First off, a definition: when I say Legals Only when it comes to a wedding, I literally mean only the legal requirements. We complete the NOIM, a month later we meet again with two witnesses, we sign the DONLIM, I introduce myself and say the Monitum, they repeat after me to say their legal vows, I pronounce them married (not legally required but I do throw that in so they know it’s actually happened!), and we sign the three marriage certificates. I usually do them at table 6 at Sugo, the restaurant near my house where I hold meetings, but for an additional fee I will go to their house or a park or whatever. I DO NOT add anything personalised (if they want to say personal vows and/or exchange rings, that’s fine, go for it, but only if I don’t have to do any work to make those things happen). I DO NOT make the table pretty, buy them a drink, offer them champagne, or make it special for them in any way, shape or form. I’m not saying you shouldn’t do that, I’m just saying that’s the way my Legals Only Ceremony works. 95% of the couples who book me for a Legals Only are having (or have had) a “wedding” at some other time, so they really just want to get the legalities deal with, they don’t need it to be special.

Having said all that, how do I ensure my couples understand what I mean by Legals Only? It’s pretty simple: I show them. I do differ from a lot of celebrants offering this type of wedding in that I meet with the couples to complete the NOIM and the booking process. I just find it easier than sending them a questionnaire and then completing the NOIM and getting them to print it and have it witnessed by someone and sending it back to me, etc etc etc. So they come to see me, and the first thing we do is that I talk them through the process, including showing them what’s going to happen during the ceremony. It goes a bit like this:

To get married in Australia you have to be over 18, you can’t be married to someone else, you can’t be siblings, and you have to give consent. Do we meet all those factors? Yes, great. Today we’re going to complete a Notice of Intended Marriage [I show them what it looks like]. This is you giving notice to the government through me that you want to get married in at least one month. The next time we meet, any day from [date in one month] onwards, you’ll need to bring two witnesses with them. The only requirements for the witnesses is that they need to appear to be over 18, and they need to be able to hear and understand the ceremony. The first thing we’ll do on that day is sign the Declaration of No Legal Impediment to Marriage, which is you again confirming there’s no legal reason you can’t marry: you’re not married to someone else, you’re not siblings, and you’re over 18. Then we’ll say the following words [at this point I literally show them the page in my information booklet with the “script” written on it – see below]: I’ll introduce myself as the authorised celebrant, I’ll recite the Monitum, which gives the definition of marriage in Australia, you’ll both repeat after me to say your legal vows, we sign some documents, and you’re married. That’s it. Is that enough? 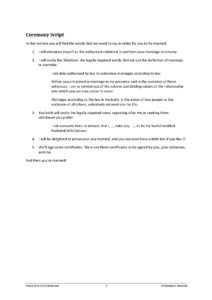 That last part of the conversation is super important: asking them if what I’ve just shown them is enough. 99% of the couples say yes, absolutely. But even if they’re happy with it, they often express surprise that that’s all there is, that it’s so quick and easy. It’s much better to get that surprise out the way at this stage, before we get to the ceremony day or the lead-up.

For the 1% that say “but where does Dad walk me down the aisle, and where do my bridesmaids stand?” I can just say, “oh, that’s not what I mean when I say Legals Only. You’re looking for my Short & Sweet Ceremony,” and then I go on to show them that script, and they’re always happy to go up the step.

This method, actually showing them the script, has worked for me with no problems at all in the several years I’ve been offering Legals Only weddings. Yes, I’ve had some couples who have essentially thrown a full wedding, which annoys me, but they haven’t expected me to deliver any more than what they’ve booked (I’ve just felt awkward delivering 124 words to 50+ people, so I now limit it to 10 guests unless by prior arrangement).

When I rang and had a chat to Nat about how she was managing her process, she admitted she tells them that there are only 124 words, but she doesn’t show them what those words are. I really do think that people have no concept of how little 124 words actually is, and until you show them, they just won’t know what you mean.

So that’s my advice! Show them what they’re getting, have a clause in your contract that the ceremony will only encompass the legally required wording, and if at any point they start to push back that they want more, be strong enough to explain they’ll need to upgrade to the next level of ceremony that you offer. You can do it!

PS: I often hear from celebrants that they’ve ended up doing more work than they’re being paid for, whether it’s because “they just wanted something short and sweet so I gave them a discount, and now they’re wanting four rituals and five readings and the ceremony is going to take an hour”, or “I agreed to do the legal stuff with their friend delivering the ceremony, so I gave them a discount, but now I’m having to do heaps of extra work like coaching the friend and writing the script”. I’ve literally never had that problem, and I put it down to two things: the first is that I question them closely to see what they’re actually looking for (I often have couples say they want a short ceremony, but when I ask them what that means, they say no longer than 30-45 minutes; that’s a normal ceremony!), and I set very clear boundaries around what I will provide for the amount I’ve charged them (short and sweet ceremony? No problems, here’s my standard, non-personalised script. Co-deliver a ceremony with a friend? No problems, I’ll spend this many hours and provide you with this amount of assistance; anything else costs more). Be clear, set boundaries, and I hope you’ll have a far more pleasant life! 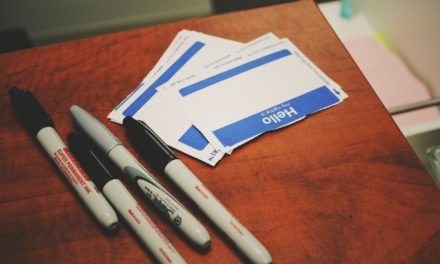 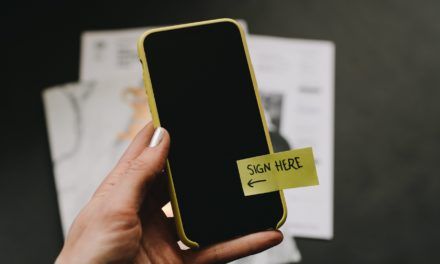 Witnessing a NOIM over Zoom in the COVID-19 lockdown